8.3 Influences of Soil on Bioavailability of PAH

Bioavailability of PAHs in soil is thought to be largely related to the partitioning of PAHs within the soil matrix, although in some recent studies partitioning alone could not explain differences in PAH uptake in swine orally exposed to different soils (James et al. 2016; Peters, Wickstrom, and Siciliano 2016). PAH partitioning in soils is dictated by the chemical and physical characteristics of the source of PAHs, chemical and physical properties of the soil matrix, and age of the release of PAHs to the environment.

Several soil characteristics (for example, organic carbon or clay content) may affect PAH bioavailability, although the PAH source and the presence of black carbon (such as soot or char) in the soil will generally be the main factors controlling PAH partitioning (Roberts et al. 2016). Certain PAH sources (for example, soot, chars, coal, coke, and coal tar-based clay targets at skeet range sites) have been shown to strongly sorb PAHs and, therefore, are more likely to result in reduced bioavailability (Xia, Gomez-Eyles, and Ghosh 2016). SERDP recently sponsored research to asses these factors (Lowney et al. 2017). Sites affected by these sources and with high black carbon contents are therefore good candidates for bioavailability investigations. PAH bioavailability also tends to decrease with time as the more bioavailable PAHs are degraded/volatilized, and the remaining PAHs become increasingly sorbed within the soil matrix.

Soot and chars are the remnants of incomplete combustion and are commonly termed “black carbon.” These solid phases offer strong sorption sites for PAHs. Studies indicate that PAHs may have an affinity for black carbon that is several orders of magnitude greater than reported for natural organic matter (Cornelissen et al. 2005). Additionally, solid PAH source materials, such as soot and coal tar from clay target fragments, have a larger influence on the partitioning of PAHs than other soil properties, such as organic carbon or clay content (Xia, Gomez-Eyles, and Ghosh 2016). This increased partitioning by soot and coal tar is reflected in decreased dermal absorption in excised pig skin. Dermal and oral bioavailability studies using soils affected by clay target fragments (USACE 2016) and lampblack soot (Stroo et al. 2005) also report reduced dermal absorption, reduced gastrointestinal (GI) absorption relative to freshly spiked soil samples, or both—further confirming that source material must be considered when evaluating potential bioavailability of PAHs in soil.

8.3.2 Geochemical and Physical Properties of Soil

Much research is available on the properties and sorptive capacities of soils and sediments as geosorbents for hydrophobic organic compounds (HOCs), including PAHs. Soil properties generally have less impact on PAH bioavailability than the source characteristics, but the inorganic and especially organic materials in soils and sediments also can have a significant effect.  Generally, properties that control the sorptive capacity for hydrophobic organic compounds (HOCs) are the most important properties to consider.

Since bioavailability of HOCs in soil is largely related to solubility, most research into the potential effects on bioavailability of HOCs from various soil properties is based on studying partitioning kinetics of HOCs from the stationary phase of the soil matrix into the aqueous phase. After the effects of PAH source material, soil characteristics including black carbon, organic carbon (OC), and clay mineral content are likely to have the most significant effect on PAH bioavailability. Other soil characteristics, such as pH, cation exchange capacity (CEC), and aerobic/anaerobic conditions, may also affect bioavailability of PAHs in soils and sediments to a lesser extent (Chung and Alexander 2002; Luo et al. 2012). Figure 8-1 illustrates PAH availability for oral or dermal absorption as a function of PAH source materials and soil chemistry. 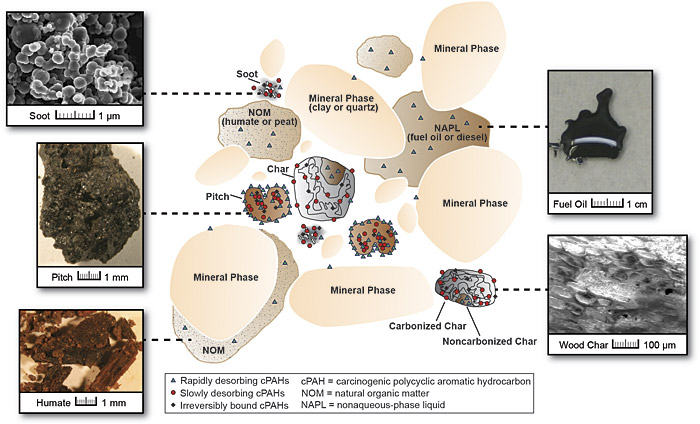 In soils, organic carbon (OC) principally comes from detritus material and its degradation products, as well as kerogen, coal, soot, and charcoal (NRC 2003). Many studies demonstrate that the amount of OC in soil and its composition affect the bioavailability of HOCs. In these studies, OC is usually divided into components based on the structure and stability of the OC. OC can be broadly divided into amorphous OC and black carbon. HOC sorption in the soil environment can be broadly described as a combination of sorption to these two phases (Accardi-Dey and Gschwend 2002).

Soil aggregates consist of a variety of particles that include both organic and inorganic components. Although OC is viewed as the principal adsorbent surface for PAHs in soil aggregates, inorganic surfaces associated with clay minerals can also demonstrate adsorptive properties (Luthy et al. 1997; Schultz, Young, and Higashi 1999), especially in soils with low carbon content (Sawhney and Gent 1990). These adsorption properties, however, have low desorption activation energies (Ghosh, Talley, and Luthy 2001). PAHs can therefore be quickly released from mineral surfaces under conditions favoring desorption. PAHs weakly sorbed to the mineral fraction are likely to be more bioavailable for humans following incidental ingestion or dermal exposure.

8.3.3 Effects of Aging Contamination in Soil/Sediment on PAH Bioavailability

PAHs in soil and sediment undergo a weathering process over time that changes the overall chemical composition and can increase the sequestration of PAHs within the soil/sediment media (Alexander 1995, 2000; Northcott and Jones 2001; Luo et al. 2012). With time, PAHs in the rapidly desorbing fraction degrade, volatilize, or slowly diffuse into more sorptive and inaccessible phases within the soil matrix. Thus, the bioavailability and toxicity of PAHs remaining in soil and sediment may decrease over time.